Best weather of the trip today, so we were able to do lots of exploring.  Plus, here in Philadelphia, many of the sights are close together (and our hotel is in a good location). 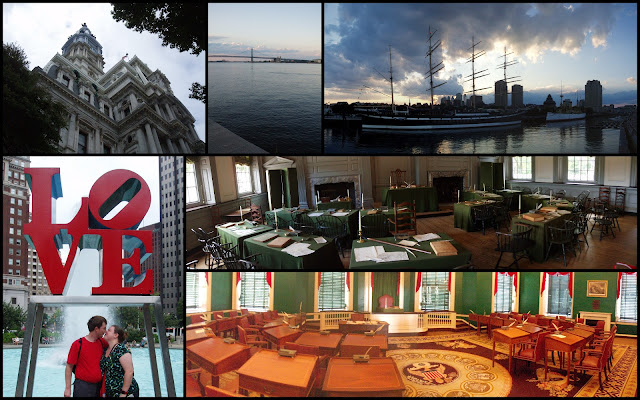 I walked to the US Mint and walked through the tour right as they opened at 9.  Had the place to myself.  Several windows look over the production floor, and at the last window you could see the room where they produce the five-ounce silver bullion coins.  Today they had a table of Mount Hood bullion “pucks.”

Then Diana and I took the trolly to the Philadelphia Academy of Fine Arts.  She was able to track down some of this year’s Academic Decathlon artwork.  Along the way, we snapped photos of the City Hall, a phenomenal and ornate structure.  From there we walked to JFK Plaza and the LOVE statue.

We had lunch at the Hard Rock Cafe and made our way to the Independence Park visitors’ center to pick up our reserved tickets for the tour of Independence Hall.  Today’s tickets had been out of stock for over an hour, but evidently some people were missing from our tour because we were able to accommodate many walk-up guests.  Tours can be as large as 80 people.

You have to pass through security to enter the majority of the city block where Independence Hall stands.  Once inside the security fence (your bags are searched — not too bad), you have access to the buildings and courtyard in that area.

The tour guide at Independence Hall was very knowledgeable.  He asked us if we could name signers of the Constitution.  As people would suggest names, we would respond with plenty of information:  “Thomas Jefferson was in France at the time and did not sign the Constitution.” or “John Dickinson did not actually sign, he was sick — you see him in the painting here — and left before the signing, but his name is on the document because George Read — shown in the painting here — signed Dickinson’s name for him.”

After the orientation, we visit the court room in Independence Hall, then we see the Assembly Room where the Declaration of Independence and the Constitution were drafted and signed.

In the building next door, I took a short tour of Congress Hall, where the US Congress met while the Capitol was in Philadelphia.  The House of Representatives met downstairs, the Senate upstairs (lower house, upper house…).  Much of the furniture is reproductions, so you actually get to sit in the House chamber — pretty cool.

Then we walked out of the secure area and toured the Supreme Court Chamber.

Later for dinner, we went to Campo’s, then walked around Penn’s Landing.