Started off today with a bus tour that dropped us off at the Metropolitan Museum of Art. 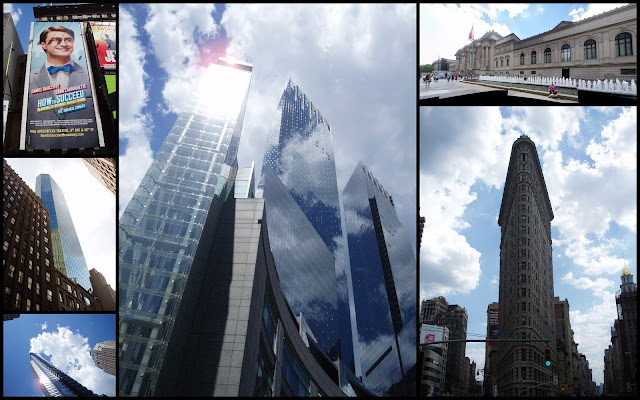 We have tickets for the double-decker bus tours that loop all over the city.  We started with the uptown bus and stopped at the Met.  The place is HUUUGE!  We only saw a little of it, finding more of Diana’s Ac-Dec artworks.  Then completed the two-hour bus tour and transferred to the downtown bus loop for two more hours of NYC info.  The downtown loop had a lot more shade, and was much more comfortable.  It got us oriented around the area, and we kept track of what places we wanted to come back to tomorrow: Empire State Building, World Trade Center, Wall Street, Battery Park, Staten Island Ferry, Canal Street.

When the tour was over, we went back to our hotel and got cleaned up for the theater.  We stopped and got Sbarro’s pizza in Time Square and picked up our tickets to How to Succeed in Business Without Really Trying.  It stars Daniel Radcliffe (Harry Potter) and John Larroquette (Night Court), and was really good.  Well, the first act was really good, the second act was awesome.  The last couple of dance numbers get outrageous.  Radcliffe’s dancing was really good, and I kept thinking, “When in his career did he learn to dance?”  It’s not like those actors who are discovered later in life and cut their teeth on the stage or in vaudeville — he has been Harry Potter since he was a kid.

After the show, we realized we were right next to Shake Shack’s theater district location, so we stopped in.  The food was just as good as last night in Madison Square Park, but they did lose our order and we had to wait about 45 minutes to get our food — oops.

Walked back to our hotel and tried to figure out how much we can cram in to tomorrow.