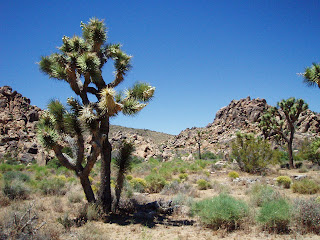 We drove to Joshua Tree National Park in California.  This park straddles two desert zones, features interesting geology and the eponymous Joshua tree cacti.  We zoomed through this park pretty quickly since we were meeting friends later in the day, but the park was a winner.  Lots of good views.  The trees were very dense in several places.  We entered by the north entrance (near Twenty-Nine Pines) and looped through the park to drive out the west entrance.  That worked out really well, and I think we spent about an hour and a half driving through the park (fee $15 if you don’t have an annual pass).

As we entered California, we encountered serious winds, then I noticed the massive wind farm.  I don’t know how those 18 wheelers handle it. 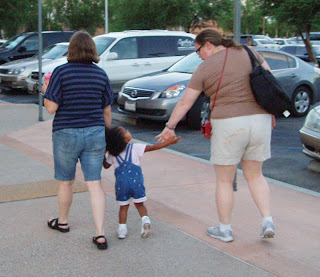 Then we met up with my college roommate who is now living near Palm Springs.  They have a nice little house, and they have done a GREAT job of settling in since they moved their just about a month ago.  Their toddler daughter was a lot of fun (very minimal whining… very impressive).  My roommate gave us a tour of the projector room of the theater where he is general manager.  That was interesting.  I never realized that all of the projectors are contained in a single long room, not multiple rooms.  His theater is a nice building that is in a very pleasant location.  He says he’s got some challenges there, but it sounds like a positive change from his previous location.