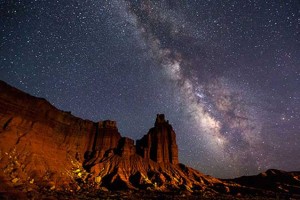 My oldest brother earned his undergraduate degree in astronomy. He puts it to good use. He studies space weather and helps design components for satellites. Sometimes we end up in remote locations with great views of the night sky. He enjoys pointing out some highlights: “The International Space Station should be visible near the horizon in view minutes over that direction,” or, “During this time of year, there is usually some great meteor activity in that area.” But if you point out a star and ask him to name it, you’ll get nothing. Ask him to point out a few cool constellations? No, not so much.

For someone who understands the world beyond the atmosphere as well as my brother does, naming stars and constellations is the least interesting part of the night sky. And here’s what amateur stargazers like me don’t always understand right away: That’s not what astronomy is about.

In 1976, Richard Skemp discussed a similar misconception in math classrooms. I can have two students who both claim to “understand” the area of a trapezoid, but they can high two very different ideas.

The first student can identify the dimensions of a trapezoid, substitute them into an appropriate formula, and accurately evaluate an expression to calculate a value representing the area of that trapezoid.

Skemp not only defined the terms, but he acknowledged these are both legitimate forms of understanding, and each has its own advantages. He proceeds to build the argument that conceptual knowledge is richer, more useful, and has greater long-term value than procedural knowledge.

In today’s math classroom, we need to consider which understanding students really need – especially given the availability of four-function calculators, and Google. And we need to keep having conversations about what mathematics is. To return to my astronomer brother, many of our math students are focusing their time on the least interesting part of math (and, I might argue, the most trivial part).